Recently Gravitas Create had the opportunity to sit down for an interview with the goopy Psy-Dub producer Somatoast. Mark is a very talented producer and was kind enough to let us take a peek into his creative mind and share some production tips.

After reading the interview, grab Somatoast’s sample pack “SQUISH” and take an in-depth look at the sound design of this innovative bass producer. Before you dive in, click play on the Soundcloud playlist below to give yourself the ultimate reading soundtrack.

Where did the name Somatoast come from? 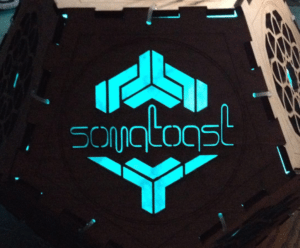 “Soma” has taken on many meanings throughout history. In Vedic culture, it was an ancient brew. It’s exact contents are unknown but it was used for religious purposes and has been described as “the elixir of the gods”. It also refers to a deity.

Do you both have a music background?

Most definitely. I’ve played music since I was very young, starting with drums around age 5. I took lessons in percussion growing up and picked up my dad’s guitar for fun.

How long have you been producing?

I suppose it’s been more than 10 years now. I started recording music in Sony Acid with a dinky computer mic and experimenting with fruity loops. by the time I was 15 I got one of those home studio packages from musician’s friend. It had all the basic equipment i needed to record at home. Then I was using Cubase. I actually didn’t get into Ableton or synthesis until around 2010

Has Austin been helpful to you in your career?

Undoubtedly yes. It’s possible I wouldn’t even be making the same music if I was never influenced by what was going on here. Austin provided me a fantastic community who greeted my weirdness with excitement and has supported me from day one. Gravitas Recordings was founded here and has given me a lot of exposure from the beginning. Jesse (Brede) and John (Burcham – aka Psymbionic) have always been amazingly helpful friends and mentors.

What does your production setup look like? (Hardware, Software, DAW, Other Gear).

I use Ableton live and a Virus TI keyboard, and an akai mpk 25 midi controller on occasion. Focal CMS 65 with home made acoustic panels I built with Roxul rock wool. I record with a SM57 through an Apollo twin solo. Electric bass/guitars also plug straight into the Apollo and are processed accordingly. My space isn’t ideal at the moment as it’s crammed into my tiny bedroom.

It’s quite hard to say exactly. I’m not one to stick to any formula or order of events. Said simply, I make noise until inspiration strikes. One thing that I think sets myself apart from a lot of my peers is that I love to jam. I’ll jam with myself. Improvise until I get a loop or two going, then add another instrument and jam on that. Then I keep adding instruments until it gets messy. Then I may organize and separate tracks to make multiple parts. If I’m feeling stuck, it generally helps to pick up a “human” instrument, like the guitar or bass. I find it can add a new direction or crystallize the vision for the track.

“I make noise until inspiration strikes”

What are your favorite plugins to use?

The Virus is my main squeeze lately, and it’s great because it’s a hardware synth that can be controlled with the plug in. Though, it definitely has some fall backs that other vst synths do better.

I guess the VST I’ve delved into most, excluding the Virus, is Razor. I also enjoy a little Reaktor instrument I found for free through Native Instruments called Steam Pipe. It’s just a little wind instrument generator but I’ve found it inspiring.

What’s a great underrated VST plugin you use that maybe most don’t?

Check out Phazor. It’s free and modeled after the virus phaser. I have also been really enjoying NI’s Replika. Been using it for some crazy reverbs and delays. I like it because it’s very straightforward and easy to use but can yield a lot of different results.

What’s one tip you wish you could go back and give yourself when you first started making music?

Well, it was never an issue in the beginning for me, but nowadays I have to remind myself to just have fun. I definitely get caught up in the pressure of putting on a good show and making innovative music. I mean, I definitely only like to release music I feel has something new or unique to say, but sometimes I get frustrated trying to appease that desire within myself. 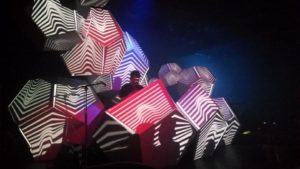 More people need to jam! Stop typing in your notes and jam the fuck out! Even if you can’t play. Just try to, then quantize and correct later. You’ll come up with stuff you could never have just ‘clicked’ in.

How do you make the goopy sounds?

Much like I write a track– just make noise and go with the flow. When I land on something that excites me, I roll with it. I think a lot of the “goopy” sounds people hear in my music can be characterized by a lack of tonality (Lots of pitch bending), and rhythmic modulation of resonant filters and phasers. I also have created a few of my own ableton sampler instruments using samples such as soda pouring and a zipper. Both of those instruments can yield some pretty goopy sounds.

How do you make all of the glitchy noises you use in a track flow together?

Think of every noise, traditionally musical or not, in terms of either rhythm, tone, or both. If a sound is not musical, imagine it as such. Then manipulate the noise to more clearly express the music you hear in it. For example, if I took a sample of say, a stick hitting the ground, I can carefully listen and pick out the tone in it, however subtle. Others might not immediately register that tone, so I’ll use a carefully shaped reverb to resonante the note and make it more obvious to the average listener. Any random noise can be blended musically this way. When each random glitch serves a musical purpose, the track will flow, despite the chaos and randomness used to create it. When working with “random” noises, you can use your tools to “prove” to the skeptic listener that what you are creating is indeed musical.

“…just make noise and go with the flow.”

Give each noise it’s own space and combine sounds in your mind to be one instrument. If you are playing a drum-set, you’re not banging on every drum at once. Each hit is organized to form a coherent rhythm. You can think of glitches that way too. Sometimes I even load up a drum rack of glitch sounds and bang on it. Jamming and improvisation are a huge part of how I make my music.

Destructive editing too. I let things get a little messy then go back and carefully delete and rearrange. Not every sound needs to be playing every beat. Think about what purpose a “lead” serves. Group multiple tracks and solo the group. Then make space for each sound to take the lead, making a unified lead out of multiple elements.

I find it helpful to make things messy at first. Then I have plenty of ideas hashed out on each instrument to chop up, edit, and sprinkle carefully and consciously throughout the song.

I went to film school and remember a professor once telling the class that in film, every single frame has a purpose. I find that to be true in music production as well. Every sound serves a purpose. If a sound is getting lost among other elements or not contributing to the whole, move it or delete it. Consciously think about each sound and the purpose it serves in your track.

Who would you love to collaborate with?

I think the question for me is less “who” I’d love to collaborate with and more “how” i’d love to collaborate. Like I said I love to jam, so I much prefer folks I can sit down and have an old fashioned jam session with. When that gets going well, the momentum keeps the rest of the production process going. If it’s an online collaborator, I’ve been feeling much more inspired by traditional instruments and composition. For example, I’d feel more inspired to work with mandolin recordings more than squelchy synth bass.

Lately, I’ve been feeling most inspired by jazz and string music and would love to work with musicians who can help me weave those styles into my sound.

What song are you jamming out to the most right now?

Literally, the song(s) I am currently working on.

Who is a producer that you think everyone needs to know about and why?

Zonra, because he’s innovative and talented.

How long were you working on “Goop” before you released it?

It’s hard to quantify the time spent on the release. Each song was at least 6 months old, most of them a year old, and in fact the track “Goop” was revived and finished after being forgotten for roughly 3 years. Forgetting about tracks and finishing them a year or more later has pretty much become a part of my writing process. There are exceptions of course. Sometimes I make unicorn tracks that are pretty much finished in the same week I start them.

Any new music out or soon to be released?

Yes, if you missed it, Zonra and I released a collaborative EP in June titled “Unraveling” via Shanti Planti. We are both very proud with how it came out. It is available on my Bandcamp and Addictech, and it should be up everywhere else shortly!

I also have a track that came out on August 14th on the Desert Trax compilation, compiled by Amani of Desert Dwellers.

Of course I also have plenty of unfinished tracks organized into potential releases, though there’s no telling when they will be released. But I can tell you right now I have folders called “Midtempo”, “Future Dreamtempo, ” “Wacky Reggae”, and “Weird Classical Journey” as well as plenty of tracks that fit into none of those categories. So, one day I’ll wake up and be able to clearly envision what needs to be done to turn any one or combination thereof into a release.

Want your own Somatoast sounds? Check out his exclusive sample pack titled "SQUISH" with Gravitas Create. Download a collection from his personal library and get started making your own GOOP! CLICK HERE.