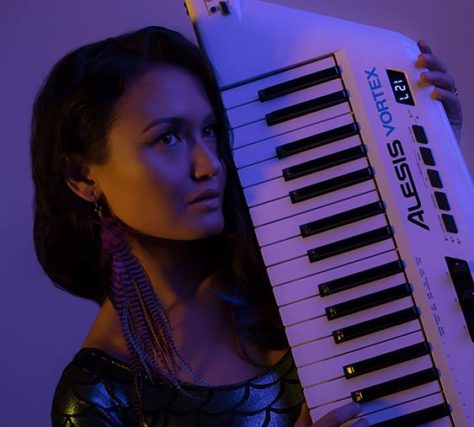 For many years ill-esha has weathered the dynamic, often ephemeral soundscape of Electronic music, simply by being an original. “I’m not really an observer. I’m very much a participant and a creator,” self-describes the Vancouver (BC)-born producer, instrumentalist, songwriter and DJ. “Everything I do in my life quickly becomes way more than a hobby.” From growing up in the EDM hotbed of the Pacific Northwest, attending raves in her teens, ill-esha accelerated her musical passions to the fullest. “First I wanted to be part of this culture as a DJ, doing vocals and curating music. After that, I also needed to participate in the music I was playing,” referring to her progression as a producer and headlining performer. “I’ve just been moving one step up at a time over the years, into being this completely original show.”

Although ill-esha’s professional career dates back to the late 90s, the Denver, Colorado-based artist asserts that her recent evolution in music greatly contrasts with her initial work. “I spent about a decade in the Drum & Bass world. I was one of two Drum & Bass female MCs in the whole country, for a long time. That’s how I got my start, and started touring.” Delving further into making the kind of music she wanted on her playlist, ill-esha’s journey broke out of genre. “Something about Drum & Bass just isn’t what I make,” she says, becoming a pioneering artist in the Glitch Hop movement and more recently Future Bass. Even that musical taxonomy is something that today, the veteran shakes off. “It now means something very different from what I do.” In 2013, ill-esha’s music started to gain more major headway, tied to three separate tours, alongside Bassnectar, Beats Antique, and Big Gigantic. With the increasing dates and venues, the artist remains committed to her audience. “After that experience, I upgraded my set-up. Now I have custom stands, instruments—even if it’s heavy and expensive to travel with, I’m proud that authenticity is what matters most in my music.”

Authenticity has been a driving force in ill-esha’s albums, including 2011’s Whiplash Recovery, 2014’s Open Heart Surgery, and most recently 2015’s Hyperbolic Space Crochet among a plethora of singles, EPs, and various appearances and side projects. Looking at this creative space she’s helped to lead, she says, “Those of us who do it own way without going with what’s hot in the market, we don’t blow up as much, but we’re all still here.” With her work covered and remixed, the artist who grew up in a professional music family, stresses, “I really try to make songs. A good song should be translatable. If I can’t play an acoustic version of it, I don’t let it sit.” Calling her own musical style “weird,” it’s something that crowds have hooked onto.

All the while, ill-esha has helped shift a paradigm in EDM. After years of suffering the music industry’s sexism, from being mistaken as a visual designer or a dancer to being discounted despite her expertise, it’s only made her sound hit harder. “I have to be better cause people expect me to be worse,” ill-esha says, noting that she plans to lead workshops that inspire at-risk youth—young women especially, to pursue the technical arts. In a culture where production is stereotyped as a masculine practice, it is ill-esha now making the records that male and female DJs are spinning.

A fully dimensional artist, ill-esha remains in touch with her DJ past. “In my live shows, there’s an extra layer of freestyle energy. I think it’s really important to make each show special, and make people have to see you.” Differentiating from the albums, she adds, “I like to make solid songs, and just a whole level of randomness when it’s live.” With turntables, keytars, vocal loopers, and other instrumentals integrated within her sets, all of the iterations of ill-esha’s journey are represented.