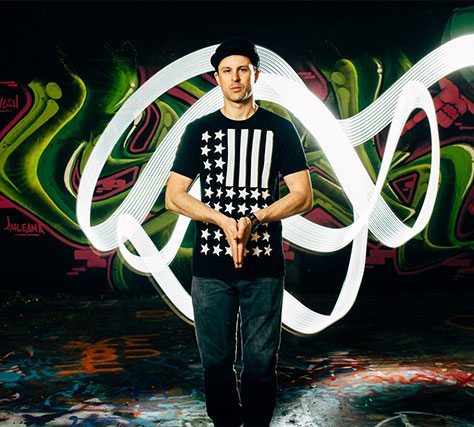 Austin native Jesse Brede has been setting dance floors afire with his original take on multi genre bass-music since 1998, but his industry savvy doesn’t stop there. The self-taught entrepreneur has tried his hand and succeeded at nearly every endeavor in the business. From founding his own record label and talent agency, to practical application of video and sound technologies, Brede has become a staple in the bass community.

Brede ventured into a new territory of music production in 2009, where he came to fully embody the definition of multi-genre bass music. Brede’s composition and DJ sets continuously defy the limits of any one particular category. An avid storyteller behind the decks, he has become notorious for affecting the emotions of listeners while teasing with expectation. Brede has shared the stage with a group of artists as diverse as his sound, such as Deadmau5, PANTyRAiD, Skrillex, and Bonobo at highly-esteemed events. He has also established quite the reputation with appearances at Euphoria Camping and Music Festival, Great North Festival, Insomniac’s Nocturnal Festival and Art Outside.

Brede founded Gravitas Recordings in 2011, a record label and creative collective that serves as a platform for artists to showcase their work. The label’s mantra is “Doing Good with Good Music”, making it more than just a music platform, but also an outlet to fulfill philanthropic initiatives. In true Brede fashion, the brand refuses to be compromised by genre limitations and continues to raise money for various charitable causes through different compilations. Gravitas currently boasts over thirty talented producers worldwide and over sixty releases. The brand’s primary focus is to release quality music that is accessible to anyone with Gravitas’ signature “pay-what-you-want” business model.

In January 2014, Brede founded Temporal Talent, a booking agency for innovative electronic music producers and performers. As one of the company’s three partners, his unique position within the industry is sure to foster mutual ideals and facilitate growth at a national level. Jesse is also the owner of Lion’s Share Digital, a full service digital media and web development firm that has worked with a plethora of clients in the music industry and beyond.

A true master of his art, Brede makes his work appear as effortless as play. He finds fulfillment in assisting and serving others, and his integrity speaks for itself. Expansion seems to be the universal theme when contemplating Jesse’s fierce future vision, as he would like to see all facets of the creative world represented in his daily life.